Some days I feel like I can take on the world, with my “I’m a successful multi-business owner, supermum with energy to rival the Duracell Bunny on crack” attitude and a “don’t mess with these shoulders” confidence. Some days, on the other hand, I feel like this:

Yesterday was the latter. I woke up with a stinking cold and a head so cloudy it felt like I’d been sniffing glue all night (not that I’d know what that feels like…though I have been known to give the occasional Magic Marker a sniff when it’s new out of the packet, just to appease my inner rebel). Long hours, a lack of sleep and marginally above average work stress had lowered my immune system just enough to let in a taste of the man-flu virus that had been going round. Obviously, if I were actually a man, I’d be dead already. But being a kick-ass multitasking circus mum who simply does not have the time to be ill, I knew that it was nothing a (large) mug of Lemsip with double espresso chaser couldn’t handle. It had, however, stripped away the first few layers of my game face, responsible for socially acceptable answers, patience for repeated questioning of “why, mummy?” and the ability to tolerate things climbing on me whilst on the toilet, including pets and small humans. What I was left with was basically the functionality of a robot and the personality of Lee Mack. I knew that if the day was going to end any other way than me rocking in the corner whilst Joshua ran feral in the garden, riding naked on the back of the cat, then I’d have to reserve what remained of my energy (and sanity) for the things that mattered the most. I had to be prepared to pick my battles.

The first battle of the day was getting Joshua dressed to go to toddler group. Usually this isn’t a problem – he picks his clothes (from a choice of two outfits that I pre-pick knowing that I’d be satisfied with whichever he chooses, and still be able to boast to other parents that he “picked his outfit himself, what a fabulous sense of fashion he has #SoBlessed”), and dresses himself (with a bit of prompting and reverse psychology, and the occasional re-dress when he gets both legs stuck down one leg hole and insists he has “three legs” which of course prompts uncontrollable giggling from both Dave and me because we are #SoMature). However, yesterday no amount of reverse Psychology could persuade Joshua that getting dressed was a good idea. I started to take his pyjamas off and he pulled them back on, insisting that he wanted to do it. So I gave him the opportunity to do it himself. Did he do it? No he did not. This repeated several times before I decide to call his bluff. We had 5 minutes to be out of the door and short of letting him roam naked through the streets of West Bridgford like some kind of modern-day middle-class Mowgli, I scooped him up and put him in the car in his PJs. It just so turned out that yesterday was World Book Day, and his pyjamas had ‘Paw Patrol’ on them, so if anyone asked, it was completely planned and I was actually a very organised and forward-thinking mum who was advocating reading from a young age. It’s definitely not the case that the only Paw Patrol Joshua has been exposed to is on his iPad whilst I desperately seize 5 precious minutes to wash the pots, empty the tumble dryer and find whichever cat has hacked up the newest fur ball onto the kitchen floor.

On the way home from Toddler group, we stopped off at Asda. All of the parent-child spaces were taken, so we parked across the other side of the car park. On the walk from the car to the supermarket entrance, we passed 3 people (amongst many others I’m sure) who were blatantly abusing the spaces. One was a lady who instead of a baby in her hand had a fag; one was a 2-seater sports car with no sign of children; and one was a van with a teenager Sat in the front whilst the driver was in the supermarket to ‘justify’ them taking the spot. A part of me wanted to approach some of the obvious offenders and point out the wrongdoings of their ways…but a mixture of my hate for confrontation, my sleep-deprived state, and the fact that I had Joshua with me meant that I ended up simply muttering under my breath and shooting cutting looks their way (only when they weren’t looking, obviously).

Although I did not have the mental reserves to pick this battle openly, I thought about why the situation bothered me so much, and decided that it boiled down to the fact that we needed a parent-child space and the aforementioned space invaders did not. Here is some of my reasoning:

We recently got a new blender. It’s a fancy-shmancy one that does everything you’ll ever need to do and even washes itself – actually, we might as well rip out the kitchen and just have the solitary blender in the room on its own so that outdated appliances like the oven and freezer don’t mess up its feng shui. I’d say about 50% of what we’ve tried to make in it so far has been a roaring success. The other 50%…lets just say it’s experimental. Dave made one of these ‘experimental’ pieces the other day – a butternut squash soup. He followed the recipe exactly, so when it turned out not to taste of anything, he was understandably disappointed. I said I’d have a go of ‘fixing’ it yesterday, so I went about adding bits and bobs we had in the fridge and cupboard to make it more flavoursome. The colour resembled that of a breast-fed baby’s nappy. I tasted the new improved flavour. Still nothing. Like, it didn’t taste bad, it just didn’t taste of anything. How is that possible? It had eleventy billion frickin ingredients in it by the time I’d finished! In a feat of desperation, I sprinkled some hot paprika into the mix, only for the top to fall off the shaker and the whole pot to disperse into the gloopy mustard colour mixture. Oh bugger. I scooped out what was still on the surface and gave the rest a whiz before tasting it again. Well, it definitely had a kick this time….to the point where we might need to invest in a supply of ice cubes to sooth the passing of the soup the morning after consumption. After investing a good hour of my life trying to fix the broken soup, I decided to, in the words of Elsa, let it go. You win some, you lose some, and this battle, I had lost.

Joshua has reached the ‘why?’ stage. I’m not sure whether it’s genuine inquisitiveness, or an innate ability to wind me up when I’m at my most fragile. He’s either a genius…or an evil genius. When he asks ‘why?’, I always try to answer him with an informative response (to the best of my knowledge). I have, so far, avoided answering with “because I said so” or “because it just is!” as I never want to stunt his appetite for learning. However, sometimes it is just a game – no matter what the answer, his response will always be ‘why?’. I’ve found that, just like in computer programming when a piece of code gets stuck in an infinite loop, an escape from this never-ending ‘why’ paradigm (a ‘loophole’, as it be) is to respond with some good old fashioned “why do you think, Joshua?”. This causes him to think about his previous question and suggest an answer himself. I found this was a way of winning the battle, without causing a war…or a mental breakdown. Worth a try, if you’re ever in this situation with your inquisitive pet human.

My recent battles have not just been with Joshua, but on a much bigger scale, both mentally and professionally. I received a call last week, from BBC’s hit TV program, Dragon’s Den, asking me to be on the show. My immediate reaction was “thanks, but no thanks” – I think I genuinely laughed at the guy on the phone. First and foremost, Deborah Meaden scares me! I mean, I respect the pants off of her, and that’s an even scarier prospect – having your business ripped apart by someone you idolise. But before I put the phone down, I gave them my contact details and they emailed over the paperwork for me to peruse. I put out a little jokey status on Facebook, asking for people’s general opinions, and the support was overwhelming! 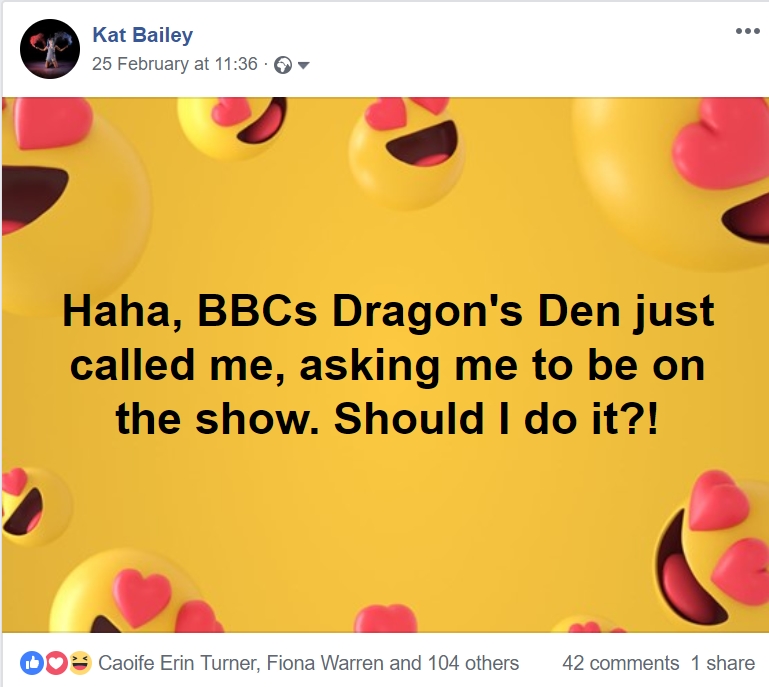 After that, it wasn’t as easy to dismiss as I initially thought. People made valid arguments in favour of appearing on the show and I yoyo-ed in my mind as to the best thing to do. In the end I made an old-school paper list of pros and cons and talked these over with Dave. Dave is great in these type of situations, as he will always support me in whatever I decide to do, but he is often the voice of reason and regularly grounds me when my visions go from white horses in the sunset to unicorns farting rainbows and glitter. One of my New Year’s Resolutions was to stick to my gut instinct more, and after much deliberation, I decided that I had two other MASSIVE things in the pipeline this year (I’m not at liberty to blog about either yet, sorry!), and that I didn’t need another challenge. Sorry Dragon’s Den; I’m out.

In summary, we’ve all got our own battles to face, whether they be emotional, mental, or physical. Some are on a day-to-day basis, and some are much more profound. But we only have so many hours in our lives and finite resources to deal with them. So we must decide which are truly important to us; which offer enough promise of reward that they are worth the endeavour to succeed and the gamble of losing. Because there is an element of risk involved, otherwise it wouldn’t be a battle, it would simply be the way. Sometimes it’s better to gracefully step back from the battle, in order to win the war.